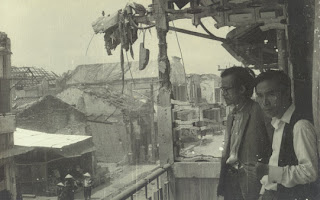 Joan Baez dubbed him Vietnam's Bob Dylan. In Tran Anh Hung's film "Vertical Ray of the Sun," he shares the soundtrack with Lou Reed, Arab Strap and The Married Monk. Pretty good company, yes, and a nice comparison, but Trinh Cong Son was always his own man. To the South Vietnamese government, he was way too left, but to the Communists, he wasn't red enough. He survived the Vietnam War, only to be condemned to hard labor for four years. When he died in 2001, from diabetes, liver and kidney failure, from decades of boozing, it seemed that all of Saigon showed up for his funeral. Born in 1939, he grew up in Hue, then became famous in Saigon. Tragic, resigned and romantic, his songs embody the atmosphere of wartime Saigon, especially when they're sung by the soulful, husky-voiced Khanh Ly, with her bluesy, heart-wrenching, Billie Holliday like phrasings. I translate two songs. Click on the titles to hear them sung by Khanh Ly.

How many years playing a human role
Then one evening, hair white as lime
Yellow leaves falling from on high
A hundred years dying in a day

Is sunlight as pink as your lips?
The rain as sad as your eyes?
Your hair in each small fiber
Fallen into life makes waves drift

Is the sunlight still jealous of your lips?
The rain still sad in those clear eyes?
From the moment I took you home
I knew we’d be separated for good

You did a very good job on translating the songs. very poetic, and the content is still preserved.

Thank you so much for the translations.

Could I coppy "Sand and dust" into my blog?