Launching a literary journal with an attitude is a domain of the very young. The energy, enthusiasm and hunger to promote your esthetic (and yourself) are found in abundance in editors in their late 20’s or early 30’s. Although most of these journals are ephemeral, appearing for only a few issues, with tiny circulations, their existence invigorates American literature. (Something that’s direly missing in Vietnam, for example, where there’s no liberty to publish, hence the underground samizdats.) Reflecting solely the taste and eccentricities of their editors, and not lorded over, checked by an academic junta, these independent journals tend to be much more interesting than the university variety. Among the major ones to appear in recent years are Tony Tost’s Fascicle and Daniel Feinberg’s and Dan Hoy’s Soft Targets. There are countless others worthy of attention. Shifter, edited by Sreshta/Rit Premnath, is virtually

unknown among writers because it’s not, strictly speaking, a literary journal. Its statement begins: “Shifter's nature is such that it changes every issue. What worked in the previous issue doesn't work anymore. What failed may be substituted with new deficiencies.”

Certainly no failure, Shifter has gotten increasingly more complex and intriguing, with each issue a work of art that rewards close reading and looking, its various components deftly woven together to yield constant surprises. Among many gems and tidbits, the latest, number 9, features “Exploding Bodies, Fragmented Territories, Hamas’ Martyr-Images and Palestinian Land-Body Metaphors” by Lisa Vinebaum, “The Disappearance of the Author? Hyperauthorship and the Case of Araki Yasusada” by Kristen Schaffenberger, and a prose-poem sequence by Jeremy Hoevenaar, his very first published text. I’d bet the amount of my next bounced check that it’s better than anything in the current Kenyon Review:

Chapter the First
From the safe distance of spaceships one can make pronouncements like “constellating is the historic hospital for the human wound.” There is no need to fear reprisal. Reprisal is another node that can be appropriated by the vocal net and misconstrued into the negative potential of made decisions. It couldn’t be clearer. Which may be. Wait. A diagnosis is forthcoming. Something will have to be colonized under an expanded conception of colonization – a flag or a bronze folly implicating the generosity of empirical mishaps perhaps. What is the smallest component of rupture? How much time is left of money? One finger on the killing floor. “Blood Is Beautiful.” The past is ridiculous - a good opportunity to employ the word ridiculous. Propose space grammar. Ruin-syntax. Relax. Our doctors will set the broken appendices. It’s too late to explain.

Chapter the Second
Specters thrive in a vacuum and abhor ornamentation. Keep this in mind when raising your glorious monument. Use materials that glint or gleam when washed with light. You hope for a staggering effect. Also the ability to be interesting. Upstairs from curiosity is where most upstaging takes place. For _______ sake check the temperature! Insert rhythmic designation of that which circumscribes context. In other words – con the text before it cons you – out of your surplus medium, into running backwards and feeling philosophical – other effects are certain but remain undocumented. The last deposed dictator was famous for saying “it was never meant for us to build anything.” Above all use solid, high-quality materials. Take lessons from the Project for the New American Entropy. Otherwise you run the risk of your slashes tipping into a highly unstable hyphen-state.

Chapter the Third
You might call this the denouement. You might consider your audience to be the green flamingoes of Impetus Island. You might see Babel in every beehive. But these are only loose suggestions hard up for cash. Smoke is evocative. The faster you fly away. Vanishing talking points. Slather honey on yourself to ease your entry into the future. Thusly. “Something happened” can appeal to almost anyone. 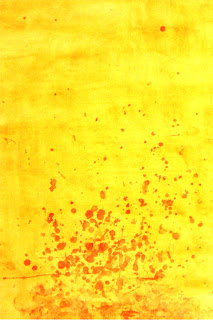 I emailed Sreshta/Rit Premnath to find out more about him and his project. Here’s our exchange:

Linh Dinh: Please explain how you started this journal? What did you want to accomplish initially? How were your aims modified by the experience of editing, and by the contents of suceeding issues?

Sreshta/Rit Premnath: Three years ago, due to visa related complications I found myself back in Bangalore (India), and ended up spending a year there. I grew up in Bangalore, but had done my undergrad at the Cleveland Institute of Art and had just finished my first summer in Bard's MFA program. As a result the art community I knew was mostly in the States.

However, I quickly realized that there was a very young and experimental art scene in Bangalore and became involved in the contemporary art community there. I wanted to create a platform where both communities I was familiar with could dialogue. As far as I was concerned the internet was the only "commons" which could not be policed by US immigration policy. I decided to begin a topical magazine so that this dialogue centered around ideas that were not in themselves culturally specific, but that could be approached from different directions. The magazine has always been free, once again to circumvent the inequities of the global capitalist marketplace (exchange rates).

I think in a broad sense the aims have not changed since Shifter's inception. I’m still interested in editing a magazine which is open to change and failure and does not depend on revenue--so I don’t have to worry about sponsors or advertisers. Each issue creates a community of artists and writers who may or may not have seen each other's work contextualized together, and opens a dialogue amongst them. To me the most important thing is a space for intelligent conversation open to anybody who's interested in joining, which circumvents the economy of buying and selling, shipping and distribution... In a naively idealistic way I pine for an world where creative people are intensely engaged in dialogue with each other's work rather than competing for the attention of gallerists, publishers and collectors who invariably know very little about art.

LD: Although most of the contributors are American, most of them are in Brooklyn, as a matter of fact, Shifter still has an international scope. Is it fair to say that this is because of your own international background?

SP: You're right in so far as the last two or three issues of Shifter have been very Brooklyn based. This is partly because I moved to New York City a year and a half ago and to Brooklyn just a few months ago. I still get many contributions from artists abroad--some of the regulars live in Singapore, Spain and Russia. In fact the piece "Exploding Bodies" which you mention is by a PhD candidate at Goldsmith's in London. Strangely enough it has been difficult to motivate the art community I know in India to contribute.

In terms of my background I have always felt that growing up in Bangalore was, in itself an experience of internationalism--I grew up watching American and British TV and listening to Rock and Roll and Metal, reading everyone from Dostoyevsky to Kafka and T.S. Eliot, following global politics... but I also have five years of training in North Indian Classical Flute, speak three Indian languages and have travelled all over India. In some ways I suffer from the inadvertent internationalism of the non-westerner.

LD: You're a visual artist who deals with words. Please explain your relationship to writers and poets, either through books or in person?

SP: I have always read voraciously and would much sooner cite writers as sources of inspiration than visual artists. However I have always made things and been drawn to making things. There is something specific about the physical object which one can see in its entirety all at once (unlike a text which one needs to read through) and which has a complex relationship to the physical world and representation. Like a tattoo, it is both skin and a window into something else and sometimes even a mirror. However one's immediate impulse on encountering an object is to understand it, convert it into text. It has always been unclear to me where the art object ends and text begins, and I think interesting artists and writers explore this liminal space of the phenomenological world seeped in language.

Strictly speaking--as Wittgenstein would say--I feel that uncertainty extends to the very root of any philosophical question and artists and writers (those that I'm interested in anyway) operate within that space of uncertainty. While the topography of the questions we are dealing with are similar, the modes of representation and engagement are different. One cannot always be transposed upon the other, but they can be set side by side and though we may not always be able to point to the similarities we still understand the relationships.

To answer your question directly, I think the relationship between visual artists and writers/ poets is fundamental and has nothing to do with the use of text or image, which is only secondary.

LD: This is not a question, only an observation: in Shifter 8, Nora Schultz' piece on tourism at Chernobyl is excellent, but the many typos are a little jarring, especially in the passage quoted from the New York Times. I guess they're OK, since they contribute to the foreignness of the piece, but I'm not sure. The futbol piece by Ruben Verdu has one bit that's incomprehensible, however: "a place that dealt in unison with things." Huh?

SP: This is an important observation. Part of the Shifter project has been my attempt to clarify my relationship to editing. In Shifter 7 and 8 ("Science Seance" and "Rules and Representations") I tried something new which was to allow submissions to remain in whatever form they were sent to me. I gathered the submissions, ordered the pages and sent the issue back to the artists and writers to review it. If they were satisfied it was published as such. The result was a magazine with uneven page sizes and text left unedited. While I preserved the uneven page sizing for Shifter 9, the text was rigorously copy edited. In fact some of the essays were transformed as a result of discussions between the writers and myself. I’m still trying to understand the potential agency of an editor.

The theme for Shifter 10 is "Transparent White." Deadline for submissions is March 1. You can send an email to Sreshta/Rit Premnath at shiftermail@gmail.com for more information.

[images, from top to bottom: Maya Schindler, "the everything is this/this is everything" 2006; Sreshta Premnath, "The Skin Of Strangers" 2005, Semen and Turmeric on paper]
By Linh Dinh on 1/21/2007
Email ThisBlogThis!Share to TwitterShare to FacebookShare to Pinterest
Labels: interviews, magazines, poems, visual arts, websites

Thank you for the wonderful information.