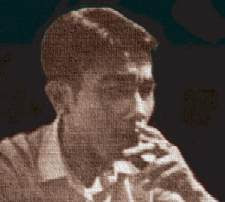 Poet and fiction writer Thanh Tam Tuyen's life mirrored the turbulent, tragic and now defunct Republic of South Vietnam. Born in 1936, he published 12 books. The first, Tôi Không Còn Cô Độc [I’m No Longer Desolate], was released in Saigon in 1956. That same year, he co-founded the groundbreaking literary journal Sáng Tạo [Creativity]. Drafted into the army, he served two stints, 1962-1966, then from 1968 until the end of the war in 1975. He was then imprisoned for seven years by the victorious Hanoi government. Released, he emigrated to the US and settled in Minnesota, where he died just in March of 2006. Thanh Tam Tuyen introduced a cleaner, starker music into Vietnamese poetry. He was also the first Viet poet to write about jazz. I translate the opening poem from I’m No Longer Desolate:

a shout is a prayer
for the waiting centuries
I want to live like I want to die
among intersecting breaths
a flaming chest
I call softly
dear
open the door to your heart
my living spirit has turned into a child
as pure as the truth one time.


[to be included in "Sources of Vietnamese Tradition," in the Sources of Asian Traditions series (Columbia University Press, 2009)]
By Linh Dinh on 12/27/2006
Email ThisBlogThis!Share to TwitterShare to FacebookShare to Pinterest
Labels: poems, vietnamese poetry

The poem included is a real gem. A marvellous poem, one that is not carefully crafted but vomitted out with a dash of blood. It would be nice to provide links to other web resources that might give out more about the poet and his poetry.

As far as I know, there are no other poems of his available in English, at least not online. Soon, I'll try to translate a few more, and post them on this site.

For my own edification I've translated a few short poems that Thanh Tâm Tuyền wrote while imprisoned after 1975.