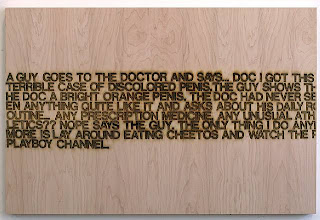 Most jokes aren't funny. In 2002, Richard Wiseman, a real name and professor at the University of Hertfordshire, England, set up a website called Laugh Lab to collect and rank jokes. 40,000 were submitted, all in English. After much fanfare and two million votes, the winning entry was about two guys from New Jersey. (Duh.) Wiseman also claimed to discover that Germans laughed at just about everything. Danes, Frenchmen and Belgians enjoyed weird, nearly incomprehensible jokes, while Americans and Canadians got off on those that made someone look stupid. Around 1997, I attended a lecture by artist Richard Prince at Beaver College, a real name, later changed to Arcadia. I, too, had applied to Beaver, but they wouldn't let me in. Like Professor Wiseman, Prince collected jokes, but sans pretensions to some methodology. He silkscreened these jokes onto canvas or engraved them into wood. I remember Prince talking about economy of language as essential to a successful joke. One extraneous syllable would ruin it. For such a funny painter, Prince seemed strangely dead in person, not just deadpan but depressed, deader than the inert language of his hilarious jokes. Deadpan means dead face. As a comic strategy, it was an American invention. Think of the contrast between Buster Keaton, the Great Stone Face, and Charlie Chaplin. What's intriguing to me is the flatness of the language in the best American jokes. These are jokes that refuse to laugh at themselves, are in fact superior to themselves, aloof, without slapstick hyperboles, sarcastic adjectives or premature irony. Check out some cool ones, from Prince:

I HAD A FRIEND WHO WAS A CLOWN.W
HEN HE DIED, ALL HIS FRIENDS WENT
TO HIS FUNERAL_ IN ONE CAR.

TWO CANNIBALS WERE EATING A CLOWN WHEN ONE TURNED TO THE OTHER AND SAID, DOES HE TASTE FUNNY TO YOU? OK, I NEVER HAD A PENNY TO MY NAME, SO I CHANGED MY NAME.

A travelling salesman’s car broke down on a lonely
road late at nite in the middle of nowhere. He walked
to the nearest farmhouse and asked the farmer if he
could stay the night. “No,” said the farmer and then
shot the salesman in the head with a shotgun.

White man: "I don't know what to do. My
house has burned to the ground, my wife died,
my car's been stolen, and the doctor said, I
gotta have a serious operation."
Black man: "What you kickin' about, you white
ain't you?"
By Linh Dinh on 1/12/2007
Email ThisBlogThis!Share to TwitterShare to FacebookShare to Pinterest
Labels: America, humor, visual arts

Very interesting. Where are you finding these?

I've seen some of these paintings in person, but you can see many of them online here: www.richardprinceart.com

Linh: Regarding my last comment, I meant to show my surprise at how very connected you are with the underbelly of poetic and artistic movements. You are always opening us up to new and sometimes unexplored arenas. Thank you!