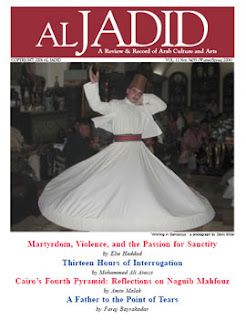 This Los Angeles-based print and web journal's mission is "to increase the awareness that Arab arts and culture continue to flourish, despite the many obstacles in the United States, the Arab world and elsewhere. In the Arab world, literature is flourishing, despite the various restrictions on freedom of expression, from both governments and reactionary elements in Arab societies. AL JADID is committed to bringing state-of-the-art coverage of all these dimensions of the Arab cultural scene, and has distinguished itself with lively debates between secular and religious, traditional and modernist voices."
Its many fine essays, articles, interviews, stories, poems, book and film reviews make this an invaluable resource and a world-class journal.
By Linh Dinh on 8/21/2007
Email ThisBlogThis!Share to TwitterShare to FacebookShare to Pinterest
Labels: arabic literature, magazines, websites