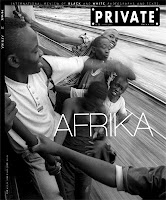 PRIVATE is a quarterly review of black and white photography and writing. This independent and itinerant publication has been offering its photographic journey since 1992.
NEW ISSUE [36]
84 pages, 139 photos, texts in English and Italian

[…] Next to exogenous images of ourselves, which are relayed by media and advertising and threaten to surround and close us in archetypes, there are endogenous images waiting to burst out and express what Delacroix calls the “chaotic world of sensations”. […] Mastering this split image is the role which photographers of African origin have assigned themselves, sometimes against their better judgement, in order to avoid misunderstandings...