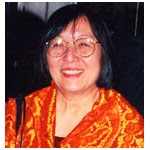 Translators of poetry from ignored, troubled countries are often political activists. This should come as no surprise since the writers they translate are often dissidents, harassed, censored, jailed or in exile. Born in Rangoon, Burma in 1943, Kyi May Kaung came to the US on a Fulbright Fellowship in 1982. At the University of Pennsylvania, she did a dissertation about centralization and totalitarianism in her home country, "and the harm it does to human beings." After the failure of the pro-democracy demonstrations in Burma in 1988, she applied and received political asylum in the US, and has worked tirelessly to introduce Burmese poets to English readers, as in this interview with U Tin Moe, with a selection of his poems in her translations, published in Burma Debate.

This morning, I received an email from Kyi May Kaung:

From Khitpyaing (New Era) Journal, based in Bangkok, Thailand.

This video documentary/commentary soberly moves back and forth between footage of recent notorious gala wedding of Gen. Than Shwe's daughter -- "Ph.D. candidate Shanghai Univ." and conditions in Burma.

Shots -- also gunshots and wounds -- from 1988 -- some first aired on Nightline with Ted Koppel.

An aged Gen. Ne Win saying, "When the army shoots, it doesn't shoot in the air. It shoots to kill."

By Linh Dinh on 3/14/2007
Email ThisBlogThis!Share to TwitterShare to FacebookShare to Pinterest
Labels: burmese poetry, politics