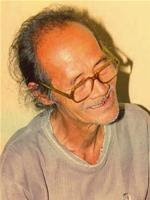 Today’s headline on Yahoo: “She’s not that innocent.” The teaser: “What drove a pop princess to rehab and unusual hairstyles?” I don’t know, do you? David Larsen has asked, What do you call a man who ignores the cares of others. The answer: Unperturbed. In certain geographies, it’s a little harder to be dazed and carefree, to be a cool, hip yahoo, simply because your own neck and ass are on the line. Poet Tran Vang Sao was born in Hue in 1942. Soon after, his father was killed by the French during the First Indochina War. During the Vietnam War, he was a contributor to the underground newspaper Thanh Niên Chống Mỹ [Youths against America]. He joined the National Liberation Front in 1965, lived in areas under its control, broadcasting propaganda until 1969, when he was injured and removed to the north. In spite of his allegiance to the Communist cause during the war--his pen name, "Vàng Sao," means "Yellow Star," a reference to the national flag--he has been blacklisted since 1972 for his candid depictions of social conditions inside Vietnam. He’s been harassed constantly, even imprisoned, his manuscripts confiscated. His poetic voice is bemused, ironic, deliberately banal, a reaction against the dogmatic bombast of many of his contemporaries. I translate four poems:


Taking The Wife To Give Birth


I Get To Eat Meat

Phan Ngoc The
died during cholera epidemic of 19..
lived to be forty two years old

night sneaking behind back in front of face left right over
head below feet
eyes
hats worn snugly
outside windows
in corners of rooms
behind a rotting bamboo partition
shhh!

night during war staying up to watch a corpse

night of B52 vomiting chemicals

These are wonderful poems.

I just received this response to Tran Vang Sao from Nguyen Qui Duc (subject: my compatriot from Hue):

"what a dark fucking tortured soul
jeezus
who ever invented Hue should be shot, stabbed in the neck with broken
soda bottle

tonight the caregiver forgot
to take care of my mother
let the dog off the leather leash
let my mom wander out
my mom forgets things
all alzheimer's patients do
lets the dog run out the gate
i lost my dog
my mom could have fallen on the wet concrete
i could have lost my mother
now the caregiver is sitting on her bed
and my mom is ranting about a million things
i stayed home all day and kept the dog company
tonight went out to meet some chinese visitors
and a french journalist and now the dog is gone
and my mom is yelling at the caregiver
"how come you know my husband is at a meeting
when i don't?"
mom thinks i am her husband
tonight my dog is gone
and a friend just called to ask
could i ride my motorcycle over
she is afraid of ghosts, had a dream last night
full of ghosts, always white these ghosts
and you people in philadelphia think
i cooked the tiny little thing
i bought the dog for 700 thousand dong
35 dollars to keep my mom company
tomorrow i may have to buy another dog
or keep my mom company all the time
myself, i can be a good dog
please don't cook me
my mom needs me
i need her
that's what i told the caregiver
she was out in the rain
looking for the dog
my mom was home alone
i told the caregiver
i can replace the dog
but i can't
my mom

You can wiki "Nguyen Qui Duc" to find out more about this fascinating character. A radio broadcaster, writer and translator, he was raised in Hue and now lives in Hanoi. In between, he spent many years in San Francisco.

Hey Linh, I heard Nguyen Qui Duc for years on KQED's "Pacific Time." Is this characteristic of his poetry, or was that in emulation of Tran Vang Sao? Knowing him only as a broadcaster, I never guessed at his satirical streak. I'm learning a lot from this blog, keep it up --David

When Duc speaks with that tired British accent, you'd think he's some uptight wanker, but the guy's completely laid back and a boozer. I haven't read many poems from him but the few I've seen, I liked. The dude lived in London for a while, and even had a British wife, so the accent is actually kosher, sort of.

Speaking of Hue: in my anthology "Night, Again: contemporary fiction from Vietnam," there's a story about a Hue prostitute. Written by Mai Kim Ngoc, it's translated by--surprise!--Nguyen Qui Duc. There's also a poem, "Hue," published in 1997 by Hanoi's Phan Huyen Thu. I translate:

To be king for a night in the imperial capital
go now, make a poem for purple Hue

Shattering symmetry voluntarily
with a tilted conical hat
an askew carrying pole
eyes looking askance
Hue is like a mute fairy
crying inside without speaking.

I want to murmur to Hue and to caress it
but I’m afraid to touch the sensitive spot on Vietnam’s body.


*lines 3, 4, and 5 allude to the prostitutes plying their trade on sampans on the Perfume River. They are “widowed” because their kings, the johns, leave them after one night.